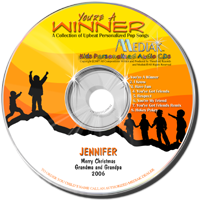 Kid’s Personalized Music was one of our fantastic sponsors during our 2nd Birthday Extravaganza in June. Just recently, Victoria sent me a personalized children’s CD to review. I chose the ‘You’re a Winner’ CD for my son who has just entered kindergarten.

I thought this CD would be appropriate because it encourages character building and the importance of respect for others. The song list includes “You’re a Winner” and “You’ve Got Friends” which I thought were good titles, especially for a young child trying to build confidence in kindergarten.

When I received the CD, I wasn’t disappointed. It was personalized with my son’s name on the front and says his name nearly 80 times throughout the CD. I was also allowed to personalize the front of the CD with a personal message from his Daddy and I. This will be a special keepsake for my son to treasure.

The CD sounds great and the songs are fun and engaging. When he got the CD, my son played it immediately and he’s played it probably 25 times in the last week. He and his sister are singing along and dancing to the music.

I would definitely recommend Kid’s Personalized Music. They have a ton of CD titles to choose from, including a new Disney collection. In addition to their website, they can also be found on Facebook.

* I received a free CD in exchange for this honest product review.