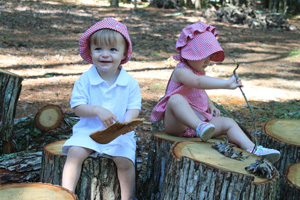 Janie McQueen is the co-owner and mom behind Susu & John. She started the boutique that sells classic, high style baby bonnets, hat and clothing in the spring of 2009. The shop offers baby bonnets in three sizes that fit ages four months to three years, based on a unique heirloom pattern; bucket hats with a unique buttons-all-‘round feature, and matching clothing and diaper covers.

As with any home-based business, balance is the key. McQueen said she tends to get a lot done first thing in the morning while her 19-month-old twins are busy eating breakfast and playing. “I’m a born multitasker so I’m happiest this way,” she said. McQueen said she does not usually work much in the evenings so that she can relax and enjoy her family.

Her business pretty much revolves around Susu (short for Sophia Susannah) and John, her twins who are also her company namesake and models. She also has two older boys, Riley age 13 and Thomas age 11 who help a lot. “They’ll babysit while I do a more detailed task and often I repay them with something special,” she said. “I also get a lot of support from my husband.” However, she said, “probably my biggest ace in the hole is that I type like a bat out of h*– er, heck. I’m a former journalist!”

“I think the ideal home business is one that dovetails with your lifestyle and the people in it,” said McQueen. “I know some moms who choose to work into the wee hours, and they might be night owls, unlike me. Some people do best compartmentalizing. But I don’t hide my business–my office is the breakfast room space off the kitchen where I can see everybody–I actually chose that space in our new house instead of a spare room we have– and I involve my children in the biz where I can. They learn how to do certain things and respect when I’m on deadline (usually).”

The Fresh Air Fund Welcome Back!
Scroll to top